How to safely simulate a laser strike

Tests conducted in an airplane cockpit in August 2016 indicate that an inexpensive focusable green LED flashlight can acceptably simulate a laser illumination.

In the tests, a green LED flashlight was focused to a beam that produced “moderate glare” (roughly equal to 40 microwatts per square cm of laser light). Pilots being tested reported that the visual effect of the green light was similar to that of directly viewing 40 µW/cm² of actual laser light.

This means that anyone wanting to demonstrate the effect of laser light to pilots or others can simply use a safe, simple, inexpensive green LED flashlight. Below is the type of flashlight used in the tests. Note that it produces only green light and that it can be focused to make the beam wider or narrower (which also adjusts its intensity at a given distance).

Green is preferred for demonstrations since the vast majority — over 90% — of laser illuminations reported to the U.S. FAA involve green light.

How to demonstrate what a laser strike is like
To do a demonstration, set the flashlight’s intensity by eye so that at a given distance the light causes glare (you can’t see past the light when it is on) but not so bright as to cause an afterimage when you look away. Then, simply aim the flashlight toward viewers who are located at the same distance.

As discussed below, the most realistic effect occurs when the light is aimed towards the viewer but only occasionally and briefly goes directly into his or her eyes. This will give a very good idea of what a laser illumination looks like.

This demonstration can be done anywhere such as a classroom or lecture hall. For pilots, it is best if it can be done when the pilot is in his or her cockpit (on the ground, at night, of course) or in a simulator. For non-pilots, it can be done with the subject sitting in the driver’s seat of a car.
How to use in simulator training
For formal simulator training, the pilot initially should not be aware that a “laser” will be aimed at them. This will most accurately reproduce flight conditions. After the first surprise illumination, subsequent runs can be done with the pilot suspecting or knowing that the simulated laser will be used.

A 2003 FAA study was conducted with commercial pilots in a Boeing 727 simulator. The study showed that after just a few times of being exposed to laser light in the simulator, pilots knew how to successfully react and recover from a laser illumination.

The study concluded: “Once they realized that the duration of the laser exposures were brief, several pilots commented that they were less concerned about the laser’s influence on their performance. Consequently, they became increasingly comfortable flying, even while visually impaired, during and immediately after exposure.... Acquainting pilots with low-level laser exposure could minimize its effects and reduce the chance of an extreme reaction. Post-flight comments indicated that familiarization with the effects of laser exposure, instrument training, and recent flight experience in the aircraft type may be important factors in enhancing a pilot’s ability to successfully cope with laser illumination at eye-safe levels of exposure.”

In the June 2018 Aerospace Recommended Practice document ARP6378, an SAE advisory committee said pilots should be taught information about laser hazards, and how to mitigate them. The information “…can and should be presented in various ways, such as printed study material, videos, and classroom presentation and discussion. Training should culminate in experiencing the startle effects of bright light exposure in as realistic a form as time and budget allows; ideally in a simulator…. it is vital that pilots also experience what a laser illumination is like under realistic conditions. This helps ‘inoculate’ pilots so they are instantly aware of what to do, and also so they understand the limits of a laser illumination – ‘It does not get worse than this.”
What the simulated laser light looks like
The photo below shows the laser light used in the tests, being shone onto a mockup aircraft’s cockpit. 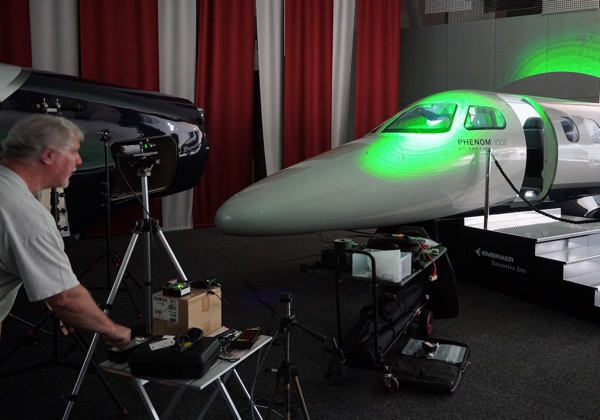 The green LED flashlight would look almost identical in brightness and color.

The main difference is that it would not have the shimmering “speckle” effect of laser light, a striking pattern of bright and dark dots that seems to be superimposed on the laser light. Fortunately the August 2016 tests showed that speckle was not vital to simulating the visual interference effect of bright laser light — a green flashlight would suffice. 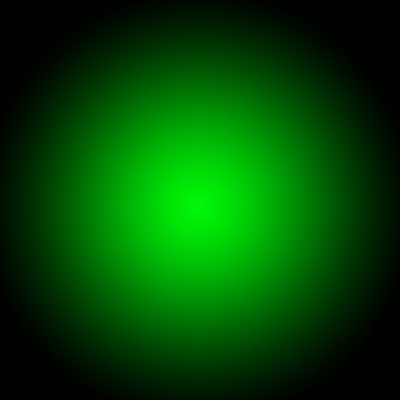 Illustration of light from a flashlight or similar non-coherent source. The field is smooth. 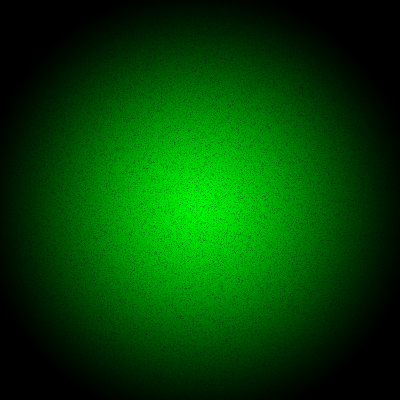 Illustration of laser light (photo). The sharp, grainy overlay is the laser speckle. This effect is unique to laser light.

Illustration of laser light (video). The laser speckle appears to shimmer when the beam and your head move relative to each other. This GIF simulates what the speckle looks like when you move your head rapidly.

The photo below shows what the laser light looks like from inside the aircraft. Due to the glare, it is not possible to see objects or lights outside the window. Again, the green LED flashlight’s light gave essentially the same visual effect. 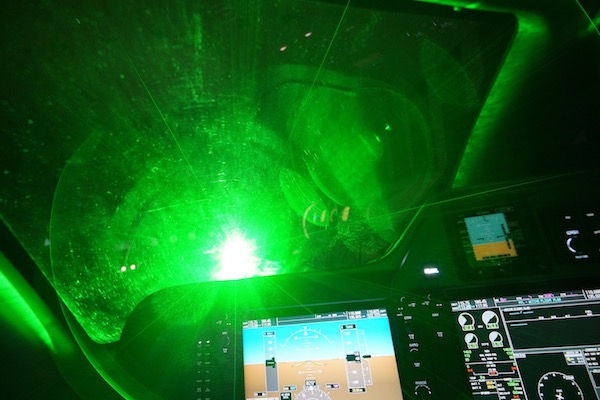 Laser strikes are usually flashes, not steady
In real-world aircraft laser illuminations, the light is not held steady on the windscreen. Instead, the light is flashed around and occasionally goes into the cockpit. Below are sequential frames from a helicopter video. Each frame is 1/30 second long. Only in one frame — for 1/30 second — is the light directly in the camera lens. 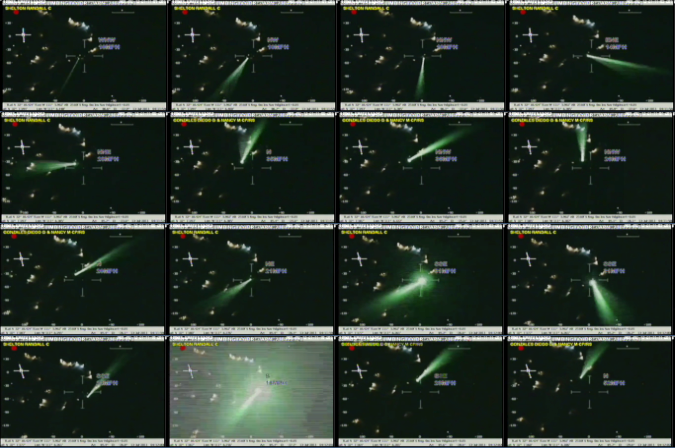 Thus, if you are trying to show what a laser strike is like for a pilot, wave the flashlight close to the person’s eyes but only occasionally directly in their eyes.

If you have LGP glasses, do NOT use a flashlight to try to demonstrate how the eyewear reduces laser intensity. It will not accurately reproduce how well the LGP works.

LGP glasses are designed for a specific laser wavelength such as 532 nanometer green. The LED flashlight’s color is more broadband meaning that it produces a wider range of green wavelengths. The LGP will let through more of the flashlight’s light, which does NOT accurately simulate the LGP’s performance with laser light.
How to demonstrate Laser Glare Protection eyewear
Here are two better and more accurate ways to demonstrate LGP’s effectiveness. In these examples we will assume the laser pointer emits the same wavelength that the LGP is designed to attenuate.

1) Aim the laser pointer at a wall, away from people. Carefully insert one lens of the LGP glasses into the beam. Be careful that the back reflection off the lens does not go near anyone. Viewers will see the laser “dot” on the wall dim or disappear. This demonstrates that the LGP is absorbing or reflecting the laser light.

For an advanced demonstration, you can use laser pointers of additional colors to show how the light from these are still visible when using the LGP. (This assumes the LGP is single-wavelength. There are multiple-wavelength LGPs available for pilots, which can attenuate more than one laser color.)
How to use real laser light in demonstrations
It is possible to safely use real laser light in presentations and demonstrations. The page Laser designator ‘flashlights’ goes into detail about how these devices can show what a large “blob” of laser light looks like on a pilot’s windscreen.

After professional calibration, it is even possible to use a laser designator to momentarily shine a known, safe irradiance into a person’s eye. This can be done so that a person can safely experience, for example, the difference between glare and flashblinding levels of laser light. 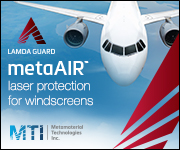 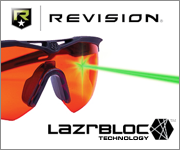 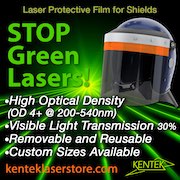 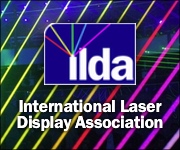 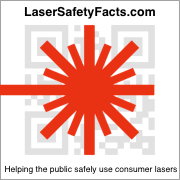